I suppose I should have written this earlier, but it’s too late for that now. Since I’ve been procrastinating, pretty much all of the reading I’ve been doing has been for school. In one of my classes, we’ve been looking at a lot of critical literature, a good amount of which has been published by Palgrave Macmillan, a division that publishes for higher education. For the month of March (which is almost over), the publishing company has made all of its journal archives free for PDF download. So, if you’ve got a few hours and a ton of hard drive space, now is your time to stock up on all the critical literature you’ll need for reference in the rest of your undergrad career (well, maybe not all, but close enough). I guess I should reaffirm to myself that this isn’t really procrastination; it’s productive! 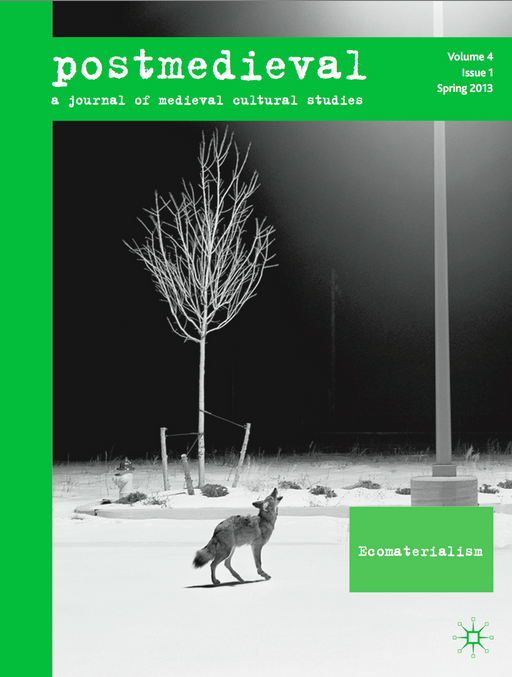 This week I’ve been reading from Postmedieval’s issue on ecomaterialism, which takes up different ecological materials (air, clouds, land, fire, etc.) and reconceives them not as spaces in which the human occurs and relates, but as spaces in which we figure as  just another node in a networked system. Rather than becoming-animal, here is where we can be becoming-world. Or maybe becoming-space, becoming-material, becoming-object, becoming the ultimate other. Perhaps this is just Becoming, of becoming with the world. This ecomaterialism issue of Postmedieval contains seven essays, each on a material that exists. Yet what they cover is more than material; each essay discusses what I would call a phenomenon—earth, land, road, glacier, et al. This is interesting. I find myself asking what exactly material is. We have the late Latin “material,” as in, relating to matter, but I wonder where we make a shift between describing something (like a material world, a world that pertains to matter) to “material” becoming a self-composing thing (like this material is cotton). And then the word “matter,” which comes from “mater,” “mother.” And here we can have another concept of matter: that which
composes and creates, and that which we are birthed from.

I am curious as to what might be considered material, and what can properly be considered matter. As I stated before, I would hardly consider most of these phenomena as materials. With the exception of fire, water, and maybe earth, all of the essays are already identifying a space of material that reaches beyond material: the glacier is not a material but rather made of material; it is actually already networked, partially by its being-called "glacier." Surely the glacier does not appear to itself as a mass, but rather is articulated to itself on the basis of its crystalline matter (ice). This is one of the reasons why fire is useful as a material (in regards to terms). It already has its own distinctions, between fire and flame. Or is fire already pushing past its being-material? Is it already phenomenon, encroaching on the flame?

In Cohen and Trigg’s “Fire,” they write that it “has a similarly uncanny capacity to transform and be transformed; to be both subject and object; and to move, if not live, beyond the moments when it burns most brightly.” This material is known by its material remnants, by what it has known, transformed, and left behind. What I want when I am speaking of material is a border, a definition of material by borders and contact, with all other material things existing as material phenomena. It seems to me that it should be some sub-speciation of an existing thing. This obviously leads me to a dead end: there is nothing that is not networked, even when we get down to motes of dust.

I love that literary criticism and critical theory lead down such wandering yet specific paths. It feels like we are never defining enough, that there is always a new way to network our world, and I truly believe that there are. We can leave an article and apply it to our thoughts, apply our thoughts back onto this kind of literature. Here, we are left with another material: criticism as intellectual birthplace, as surface and interface. Time to get clicking.

You can find all the journal titles here

The archives for Postmedieval are here

And info about the cover design is here. Image is copied from In the Middle.
Posted by The Boylan Blog at 6:05 AM