Does it seem as though there have been more mass shootings recently? Well, it’s not just you. Harvard has recently released a new study reporting that the number of mass shootings has in fact increased. The statistics are indeed sobering: 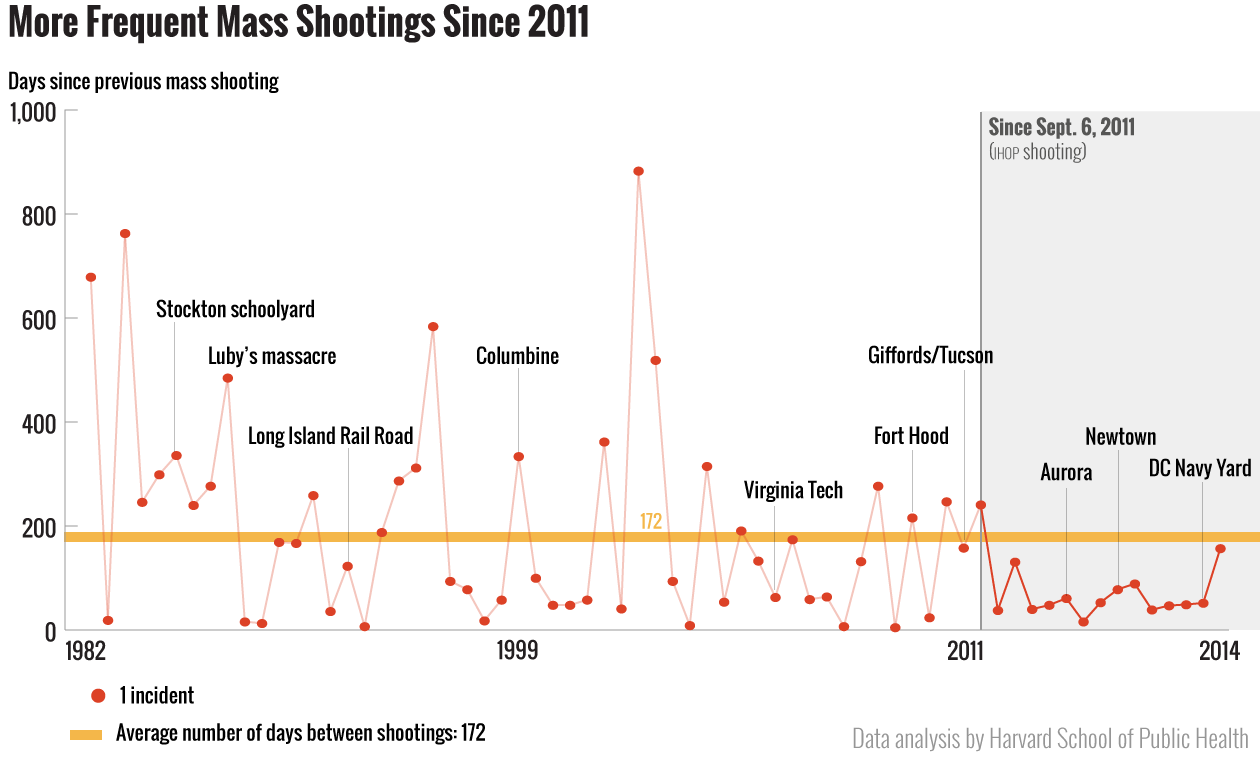 This graph is a little hard to read at first, but once you figure out what it’s saying, you can’t really unsee it. The average number of mass shootings in America over the past 30+ years is one every 172 days, or around two per year (that’s the yellow bar running through the graph). The shootings over the last 3 years have occurred only 64 days apart on average; for the past 3 years there has basically been a mass shooting every 2 months, almost three times the average rate.

And this is using a restricted definition for “mass shooting”: four or more people must be killed in a public space, like a school or mall. So this isn’t including the shooting in Santa Barbara that took place earlier this year because only three people were actually killed. It’s true, this might skew the data a little bit; there could have been more, smaller rampages in 2000 for example that aren’t reflected in this chart. But the fact remains that there are more large scale mass shootings occuring more frequently. (By the way these findings are nearly identical to the FBI’s report on mass shootings.)

This contradicts the assertion that James Alan Fox, a man literally born to be a Fox News pundit, made in response, that mass shootings are rare occurrences and that there has been no significant increase in their frequency. The problem is that he includes in his data shootings on private property, where the victims were specifically targeted or family members, arguing that “to the victims who are slain, it hardly matters whether they were killed in public or in a private home.”

Uh. What? Why don't you throw shark attack victims and people killed by avalanches in there too while you're at it? Because those victims also don't care where they were killed. Because, you know, they're dead. (By the way, this interview also includes his idiotic claim that mass shootings are just “one of the prices we pay for the freedoms that we enjoy.” *rage-induced vomiting*) Ridiculously irrelevant logic aside, that’s a different study. It’s just as screwed up, but mass shootings in PUBLIC SPACES are in fact different sociological events than a single family being killed in their homes. I’m not trying to minimize the tragedy of those more private mass-murders, but the prospect of someone coming in a shooting up a school is much different than shooting up a living room. Again, not trying to say that one mass shooting is inherently worse than the other, just that they are in fact different.

Okay, but what’s causing these sprees to escalate in number? Well, obviously, access to high-powered guns aint helpin. But I think a larger, and come on, pretty obvious, issue is that these obviously disturbed individuals perpetrating these crimes are probably not receiving adequate mental care. Not only is there a stigma in this country against seeking help for mental sicknesses but it’s harder to actually receive good, effective therapy or medical help than in other countries.

BONUS UNRELATED NEWSFLASH: Princeton recently released a study confirming that the United States is no longer a democracy, but an oligarchy, a government run by a minority wealthy elite. “This surprises me,” said no one.

PS: Oh dear god, no matter what your political leanings are, don’t read the comments on these pages. 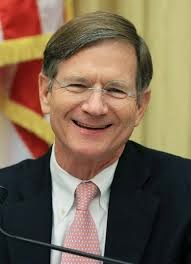 If you’re like me, you find the world to be a pretty confusing place. Everyday, we are haunted by questions that have perplexed the greatest minds throughout history: Can we truly know ourselves? Is meaning possible in a world with no God? How much do we tip an incompetent waiter? Twenty percent is too much but anything under ten percent makes us feel cheap. Besides he was probably just having an off night. Hey, it happens to all of us.

What I am trying to say is that the world is a frightening place and every time we hear a so-called “expert” explain it to us, it becomes even scarier. For example, did you know the Earth is dying? Well, I think that is what scientists have been saying since the 1960s.  To be honest, I don’t really understand most of their words because their words tend to be numbers—high numbers that indicate that the planet will one day be covered with water, like that movie Waterworld starring Kevin Costner. In that movie, he had to drink is own urine for survival, and as a soon to be parent, this concerns me.  Yes, the word-numbers (I told you this was confusing!) spoken by the science men (and science ladies) have made us all scared, but does anyone really know what these “word-numbers” mean? Where do we, the average folk, turn to for common-sense answers?

Thankfully, America has stepped up to the plate and provided us with a leader who can provide those answers: Congressman Lamar Smith, our new Chairman for the Committee on Science, Space, and Technology! Already, Smith is making waves by ignoring the scientists who are in the pockets of Big Earth and doing what is right for Americans.

This past week, the UN released their latest study on the effects of climate change and their scientists said that if we do not lower our fossil fuel consumption to zero this century, we would not be able to undo the damage that has been done to this planet by excessive carbon emissions.

But what is “zero”, actually? Can nothingness truly be attained? Samuel Beckett once said, “Every word is like an unnecessary stain on silence and nothingness.” I don’t know what that means, but I do know that it makes me sad, and as an everyday American, I can say, “I don’t like being sad.” Because of this, those word-numbers “zero” and “century” scare me.

Lamar Smith, however, makes me feel safe and comforted. When Smith says, “most of the predictions have been wrong” as he said on Bloomberg News this past Friday, I am able to breathe a sigh of relief and continue living my life with the knowledge that I won’t be forced to make even the tiniest change to ensure the survival of the human race. Nobody knows exactly what predictions Smith is talking about, but knowing that he says they are wrong is enough to get me through the day without breaking down and weeping about the horrific future we have engineered for ourselves!

Besides, the UN is basing their report on the work of only 800 scientists; scientists, by the way, who are obviously biased towards the results of hundreds of hours of meticulous analysis and rigorous scientific investigation. What about the other side? “There are a lot of scientists who disagree,” Representative Smith said, thus allaying the fears that my monstrous consumption of fossil fuels, (including the 7 gallon backyard oil pit I keep lit on fire during these cool, autumn nights) could possibly have contributed to our impeding doom.

Besides, saying there are “a lot of scientists who disagree” is a heck of a lot more reassuring than saying there are, “3 % of scientists who disagree” because as it turns out, 97% of the scientific community wholeheartedly believes, based on all available scientific evidence, that climate change is real and that it is definitely the result of human interference. Again, these “word-numbers” pop up and I find myself confused and frightened by the stark future they allude to.

But then, we get a gift from heaven above in the guise of Representative Lamar Smith. Knowing that he is now one of the main people in charge of shepherding the way in which America responds to the highly troubling scientific issues of our day makes me feel confident because Lamar Smith cuts through the confusing words and numbers and tells me exactly what I want to hear. Now, that’s the kind of leadership I can cower behind!
-Justin Gray
Posted by The Boylan Blog at 6:10 AM